Relics found in the Dong Nai River area in what is today the southern portion of Vietnam near HCMC show Vietnam flourished as a center for human habitation 4,000 years ago. The people practiced dry rice cultivation in the plains and used both polished stone and pottery implements. Many survive to this day.

During the Bronze Age and well into the Iron Age (4,000 to 1,000 years BC), the people inhabiting the lands now known as Vietnam proved themselves to be an industrious and hardy lot. The Chinese people interacted with the people of the south during this time. From the beginning, there has been a need to control nature’s waters, which compelled the people to join forces and organize centrally to conquer the great rivers in these delta regions.

The Lac Viet in the plains maintained trading relations with the Au Viet in the mountains in the present day Viet Bac (Vietnam) and Kwang Si (China). The center of their confederation was present day Cao Bang province of Vietnam. Thuc Phan, who defeated the last Hung king in 258 BC, merged Lac Viet and Au Viet. The territory of Au Lac was in present-day northern Vietnam, excluding the mountainous areas south of the Red River. It was about this time that the capital was move to about 20 km from present day Hanoi.

The year was 111 BC when the Han dynasty marched south to over run Nam Viet, then ruled by Chao To who himself had earlier merged his Kingdom of An Lac with several southern territories of China. The Chinese stayed for over 1,000 years.

It was not until 938 AD when Ngo Quyen lured the invading Chinese wooden boats beyond iron-tipped stakes anchored deep under the high tide near Ha Long Bay. The Vietnamese counter-attacked, and forced the Chinese boats to retreat. The boats become impaled on the now exposed stakes, and sunk. Thus ended Chinese Imperial domination of Vietnam.

The same year - 1979 - saw the opening of Communist China to the west with its normalization of relations with America. China thus began its most recent forward march, this time towards a “market economy with a Chinese socialist orientation.”

Since the ousting of all western powers from Vietnam in 1975, Vietnam charted its own course as a vassal state of the Soviet Union. Separate from that of China, under the protection of its super power partner, Vietnam seemed to prosper but the appearance was all shadows and masks.

Starvation of the domestic population due to the need to support a million-man army in Cambodia, the loss of foreign support with the collapse of the Soviet Union, and a pragmatic (unlike North Korea’s dogmatic) approach to life’s priorities, compelled the Vietnamese leadership to adopt its renovation (doi moi) policy in 1986.

With the last troops withdrawing from Cambodia in 1991, the US led embargo against Vietnam was lifted in February 1994. Full diplomatic relations with America was started for the first time with the Communist government in July 1995. Then, after a long five-year struggle, an all-encompassing bilateral trade agreement was signed between the former enemies in July 2000.

Now that Vietnam’s economy has slowed to only 7% annual growth (down from the 9% highs in the mid 90s), with China the only nation with equivalent growth (8%) in the region, the evitable comparison is made as the question is still asked: will China seek to dominate and control Vietnam, or can this mighty but small nation keep its hard won independence?

While almost 20 elapsed between China’s entering the world’s economy and Vietnam, many predict the gap will close completely within 10 to 15 years. Vietnam will not be the powerhouse that China is, but it does not need to be. With its smaller but more efficient population and larger literacy rate, Vietnam will be the much more detailed manufacturer of high tech and specialty export products for the world’s markets.

The implementation of the new gas supply to the southern region of Vietnam is expected to provide an enormous growth of infrastructure and increase the output of export manufacture that will push Vietnam far ahead at a much faster rate than before.

However, in Vietnam, the issues of new personal wealth have yet to be resolved. With financial independence destined to go to the educated and hard working, the old bosses can only loose their monopoly on power and thus control over the population. The new common man will sprint ahead as they have done so quickly in China, leaving the old power bosses far behind.

This is not yet recognized as desirable among all of Vietnam’s aging leaders. However, with the continued passing of Vietnam’s ancient ideologs, as in China, growth will not always be looked upon as the evil it is still considered. While at present, much of the new, individual wealth is the result of corruption; there is hope for change.

When discussed in polite Vietnamese society, these issues are often called “the sins of the fathers.”

Only fifteen years following the start of doi moi, some people are incredibly wealthy in Vietnam. They are often traders, business people, and far too often, government officials at all levels. Still imbued with memories of poverty but not burdened with many virtues from the hard times so recently passed, these newly wealthy shower gifts upon themselves and their families, almost as a means of taking revenge against the persistent poverty of their own youth. They have not yet learned the maxims: (i) a fool and his money soon part ways; and (ii) easy come, easy go.

The new youth, many uneducated and not educateable, squander their spouses or parents’ wealth, sometimes as fast as it comes in. They pay their way through universities and then wonder why no employer will hire them. They pay their way to achieve the highest proficiency certificate in English when they cannot understand, much less respond appropriately to, a simple question or read a sentence. They pay their way for everything, and wonder why they have no real friends.

One group in Hanoi, calling itself the G7, has an unusual membership qualification: each must wear clothes worth a minimum of $1,000. Taking a model from movies about drug abuse, young thugs can be seen burning $100 bills just because they have many such bills. This is still the equivalent of half a year’s income to over 75% of this rural nation’s population who are still basic, subsistence level farmers.

Buying a pair of sandals for VND 1 million ($ 65) to keep up with schoolmates is becoming common, where traditional sandals still sell for VND 20,000 ($ 1.30) for most people. There is a story going around about a 16 year old who sold her Honda Wave (new purchase price $ 700) in order to raise cash for her collection of Shesheido (Japanese) cosmetics.

Luxury motor scooters abound in both cities (Hanoi and Ho Chi Minh). These small yachts cost upwards of $6,000 and include brand names such as Honda, Piaggio and Yamaha. Look at the people riding these treasures on wheels: they mostly seem to be women between 16 and 30 years old. This is in a nation where the annual per capita GDP is still under $ 400.

Some young of the rich carry their excess into street violence. Five kids between 19 and 23, all children of government officials, were arrested in Hanoi last October when police arrived to stop their disorderly conduct. Several attacked the police and one even threatened them with the sophomoric insult, “do you know who my father is?”

His father is a department head of a well-known ministry whose public derived salary is $75 a month. And yet this perpetrator reportedly shouted to the policeman, “I spend more in one day than you earn in a month.” Where does his money come from?

Corruption, according to the Party Secretary General, is one of the greatest threats to the nation’s development, at both the highest and lowest levels. It is estimated that 70% of all funds for construction projects go where they are intended.

Where the missing 30% goes is to the department heads, their spouses, and their children. Given the lavish lifestyles of these people (who approve and work on multi-million dollar projects for foreigners earning hundreds of thousands of dollars a year), it is no wonder that the State officials forget the emphasis is on “work” and “earn” as they seek by what ever means to improve their meager lives otherwise restricted by their $ 25 to $ 75 a month official salaries.

The wealth is still redistributed, but not according to merit and its regeneration is not by intended ways.

What about work and productivity competition from Southeast Asian tigers? A recent report from Thailand, the next most stable nation in the region that also has a significant manufacturing capacity, is striking. The current minimum wage in Bangkok is 165 baht (US$3.80) per day (US$ 114/month) and in rural provinces down to 133 baht (US$ 3.07) per day.

Thais typically work a five day work week nation-wide in manufacturing enterprises while retail operations are open 7 days a week. University graduates are paid in the rage of 10,000 to 15,000 baht ($229 to $346 per month) while middle managers receive monthly wages in the range of 43,000 baht (US$1,000).

Desire for education, willingness and ability to train, job-loyalty, and high productivity are not the first elements used by Thais workers, or even foreign investors discussing their Thai workers and managers. The most prevalent concerns of Thai workers is often wages received, social standing/image, relationships, and hierarchy (that has everything to do with Thai and not Enterprise society).

There are no minimum wage standards for domestic companies that often compel their unskilled employees to work 7 days a week in 12 hour shifts for wages generally not much more than VND 300,000 per month (US$ 0.65 per day). Skilled workers do not fare much better.

And yet the most common traits for Vietnamese workers nationwide are high levels of job loyalty, productivity, a strong desire to learn, and an ease of trainability.

What to expect in the next decade or two.

Don't be fooled by the appearance of strange behavior among the new rich in this Communist land of Vietnam. Capitalism in China started in the same way. In fact, so did American Capitalism. The American “robber barons” of the 19th and early 20th centauries were not so-called due to their fair dealings, honesty, or inherited titles.

As more wealth spreads to more people, corrupt elements will be rooted out. Then, watch out! The individual freedom such wealth brings has always been and remains the best springboard to national growth.

How China and Vietnam interact becomes less important than how the people of each nation account to their own national and personal priorities. Pay attention world; theses two tigers are awake and hungry.
Cố gắng dịch hết nha! 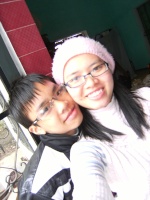